Paleontologists trace the origins of birds to about 121 million years ago in the early Cretaceous period. Birds are actually the last surviving dinosaurs, being descendants of the primitive avialans (whose members include Archaeopteryx) which first appeared about 160 million years ago in China. Birds are considered feathered theropod dinosaurs. The phylogeny is as follows:

As such, birds closest living relatives are the crocodilians (including alligators and crocodiles).

Flight may have evolved at least 3 times, but only one clade, birds, survived the Cretaceous–Paleogene (K–Pg) extinction event, also known as the Cretaceous–Tertiary (K–T) extinction, approximately 66 million years ago. This was when an asteroid or comet impact caused a sudden mass extinction of roughly 75% of the plant and animal species on Earth (Reference: Rui Pei et al. Potential for Powered Flight Neared by Most Close Avialan Relatives, but Few Crossed Its Thresholds. Current Biology 30 4033-4046.e8, 2020. DOI: 10.1016/j.cub.2020.06.105).

Currently, there are over 10,000 species of birds. Over half are passerines consisting of the song birds. Ninety-five per cent of bird species are socially monogamous. About 120 to 130 species have become extinct due to human activity since the 17th century, and hundreds more before then. Human activity threatens about 1,200 bird species with extinction, though efforts are underway to protect them. See our Conservation Section for more related information.

The classification of birds is an ongoing and dynamic process, relying on anatomical, paleontological and genetic data. A good site to begin such an exploration is the International Ornithological Commission’s website.  As of June, 2019, there are 43 orders of birds, within 2 Infraclasses/superorders: Paleognathae and Neognathae, the latter containing 2 clades: Pangalloanserae and Neoaves.

The Paleognathae, a small collection of bird groups, includes ostriches (2 species), rheas (2), kiwis (5), emu, cassowaries (4), and Tinamous (46). The Pangalloanserae includes land and waterfowl (less than 500 species). Finally, the Neoaves contains the vast majority of the rest of the birds, including over 6500 passerines. 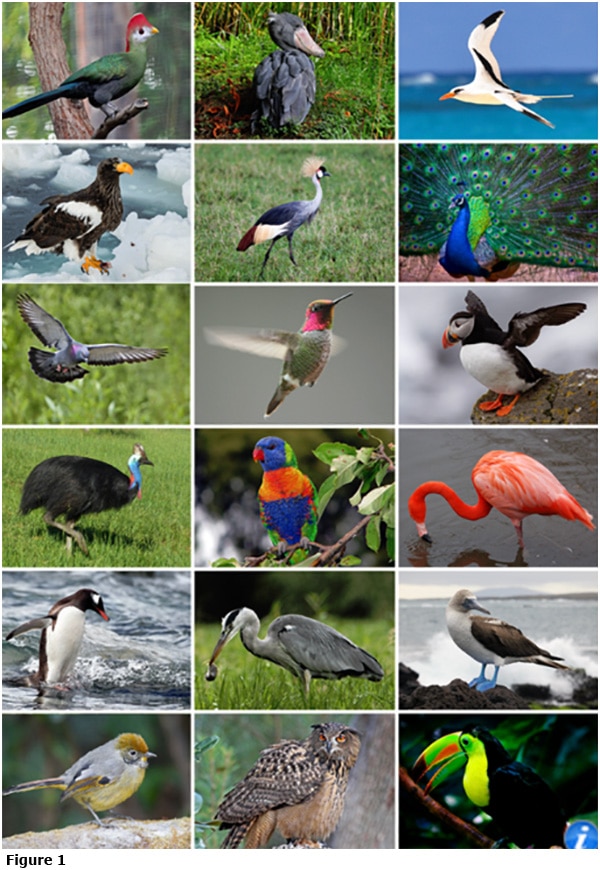 How many of these birds can you identify? Find the answers at https://en.wikipedia.org/wiki/Bird

Of course, as you zoom into a region of a bird, there is more detail to observe. And this may vary between the passerine order (song birds) and the various non-passerine orders. For example, here is an examination of a white-throated sparrow (a passerine) head and neck: 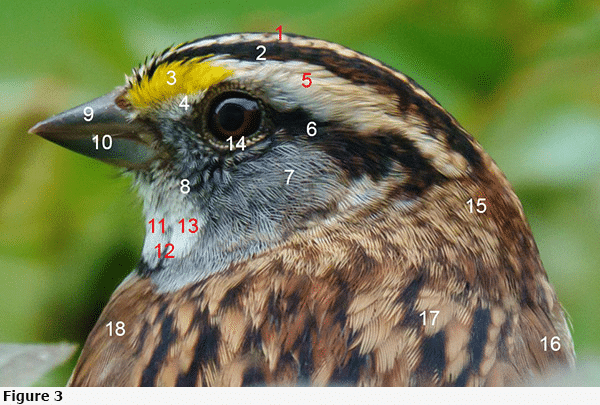 Female birds have a pair of dissimilar ZW chromosomes, and males have two similar ZZ chromosomes. Unlike mammals, males are the homogametic sex (ZZ), while females are the heterogametic sex (ZW). Males have a pair of testes but most adult females generally have only a left ovary, the fetal right one having atrophied. Kiwis, for example, have two functional ovaries as adults. Most male birds have no phallus, although the early ancestors did. However, waterfowl and some other birds, such as the ostrich and turkey, still do. Ninety-five per cent of bird species are socially monogamous. 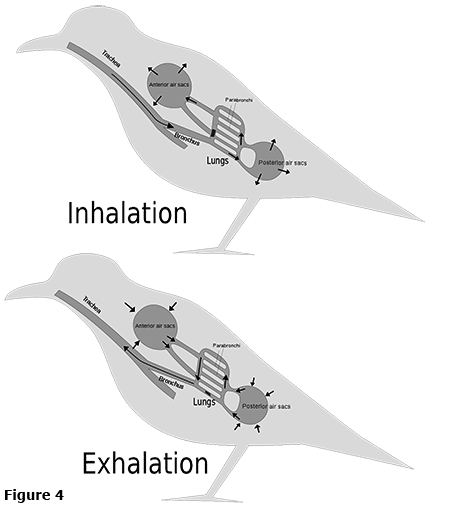 Respiration: An intriguing aspect of bird physiology is the delivery of oxygen to their tissues through respiration. Flying demands large and efficient delivery of this element to satisfy the high metabolic needs. Birds do not have elastic, expandable lungs. Instead, they have evolved a system by which the air is continuously flowing through parabronchi where oxygen is absorbed and carbon dioxide is removed during both inhalation and exhalation. During inhalation, air enters through the nostrils, trachea, syrinx and primary pulmonary bronchi. The fresh air then enters the intrapulmonary bronchi and passes through the much smaller dorsobronchi (for gas exchange) as well as into the expanding posterior air sacs for temporary storage. Spent air, having passed through the dorsobronchi, exit through the ventrobronchi and is stored in the expanding anterior air sacs. Upon exhalation, the compressing posterior air sacs push more air through the dorsobronchi for air exchange. Spent air in the ventrobronchi and compressing anterior air sacs is then expelled through the intrapulmonary bronchi and trachea to the outside. (Figs. 4 and 5)

Fig. 5. Airflow and capillary gas exchanger schematic. The oxygen-poor/carbon dioxide rich blood of the pulmonary arterial system exchanges with the air from the posterior air sacs to collect oxygen and dispose of carbon dioxide that goes into the air destined for the anterior air sacs (Fig. 5). (Illustration: Wikipedia)

Ornithology: the scientific study of birds. From the late 17th century from modern Latin ornithologia, from Greek ornithologos ‘treating of birds’.

Birds: are a group of warm-blooded vertebrates constituting the class Aves, characterized by feathers, toothless beaked jaws, the laying of hard-shelled eggs, a high metabolic rate, a four-chambered heart, and a strong yet lightweight skeleton.

Paleontology: the branch of science concerned with fossil animals and plants. From mid 19th century: from paleo- + Greek onta ‘beings’ (neuter plural of ōn, present participle of einai ‘be’) + -logy.

Phylogeny: the branch of biology that studies the evolutionary development and diversification of a species or group of organisms, or of a particular feature of an organism. From the late 19th century from Greek phulon, phulē ‘race, tribe’+ -geny – ‘birth’.

Taxonomy: the identification, naming and classification of organisms. From the early 19th century: coined in French from Greek taxis ‘arrangement’ + -nomia ‘distribution’.

Ontogeny: the branch of biology that studies the development of an individual organism or anatomical or behavioral feature from the earliest stage to maturity. From the late 19th century from Greek ōn, ont- ‘being’+ -geny – ‘birth’.

Anatomy: the branch of science concerned with the bodily structure of humans, animals, and other living organisms. From the late Middle English: from Old French anatomie or late Latin anatomia, from Greek, from ana- ‘up’ + tomia ‘cutting’ (from temnein ‘to cut’).

Physiology: the branch of biology that deals with the normal functions of living organisms and their parts. From the early 17th century: from Latin physiologia (perhaps via French), from Greek phusiologia ‘natural philosophy’.

Passerine: is any bird of the order Passeriformes (Latin passer (“sparrow”) + formis (“-shaped”)), which includes more than half of all bird species. Sometimes known as perching birds or songbirds, passerines are distinguished from other orders of birds by the arrangement of their toes (three pointing forward and one back), which facilitates perching.