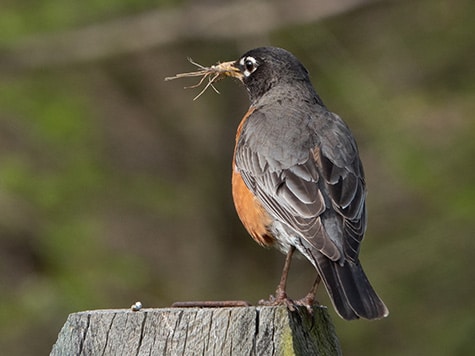 In 1915, over a hundred years ago, Patrick Geddes, a Scottish biologist, sociologist, and pioneering town planner, is said to have first voiced the phrase “Think global, act local.” Since then, the phrase has been used in business, planning, education, and, most appropriately, conservation and environmental protection.

All of us who are concerned with the natural world and its inhabitants, including birds, probably already subscribe to this philosophy. Probably we belong to, or support, various national and international organizations whose goal is the protection or enhancement of the environment and its wildlife. Some are generalists, like The Nature Conservancy or The World Wildlife Fund, and others are bird-specific, such as the American Bird Conservancy. Many of us also support activist organizations, such as the Environmental Defense Fund, which use legal means to forestall environmental degradation. In recent years, such organizations seemed to be our only bulwark against a host of threats to the systems that support our existence on the planet!

As a member of the Montgomery Bird Club, a chapter of the Maryland Ornithological Society, you are also supporting a conservation organization. MOS is not just about birding! As the MOS website states: “MOS is more than a society of birders. As our bylaws state, we want to further educational, scientific, and charitable pursuits relating to birdlife in Maryland.”

MOS has a very active and engaged Conservation Committee. MOS attempts to be sensitive to local, state, regional, national, and global issues, with the focus on state and county issues. The committee monitors state and local governments, tunes in to national groups, and coordinates with other environmental groups. The Conservation Committee testifies at hearings, compiles position papers, and writes letters.

I have been a member of MOS’s State Conservation Committee for over 10 years.  In that time the committee has tackled hydraulic fracking in Maryland, responsible management of feral cats, the ban of toxic pesticides, the regulation of off-road vehicles in natural areas, and other issues important to birds and bird habitat in the state.

A subcommittee of MOS, Safe Skies Maryland, introduced two bills in the 2020 Maryland General Assembly to establish bird-safe standards for Maryland government buildings. We hope this is a start on ending the death of birds due to building strikes. The Conservation Committee also worked with the Maryland Pesticide Education Network to introduce legislation banning the pesticide chlorpyrifos, dangerous to both birds and people. Further, MOS teamed with Audubon MD/DC to support legislation providing more effective protection of priority forests, which are critical for bird species requiring large intact areas of mature forest to breed. Unfortunately, the Maryland legislative session was truncated because of COVID-19, and these bills did not make it into law. They will all be reintroduced in 2021.

In 2020, MOS also joined the Horseshoe Crab Recovery Coalition, which advocates for protection of the horseshoe crab and reduction of its harvest. This will benefit shorebirds, most notably the rufa subspecies of the Red Knot, a candidate for protection under the Endangered Species Act.

In addition, MOS, through the Conservation Committee, routinely comments on many issues of national importance, such as the previous federal administration’s proposed weakening of the nation’s fundamental law protecting birds, the Migratory Bird Treaty Act. MOS also joins other environmental organizations as signatories on letters addressing a wide variety of issues of national and, sometimes, international importance.

So, as an MOS member, you are already deeply involved in a wide range of conservation activities, from the global to the local.

Now it is time to ask, what can YOU, as an individual, personally do to help birds and their environment? The answer is—a lot!

See How to Help Birds